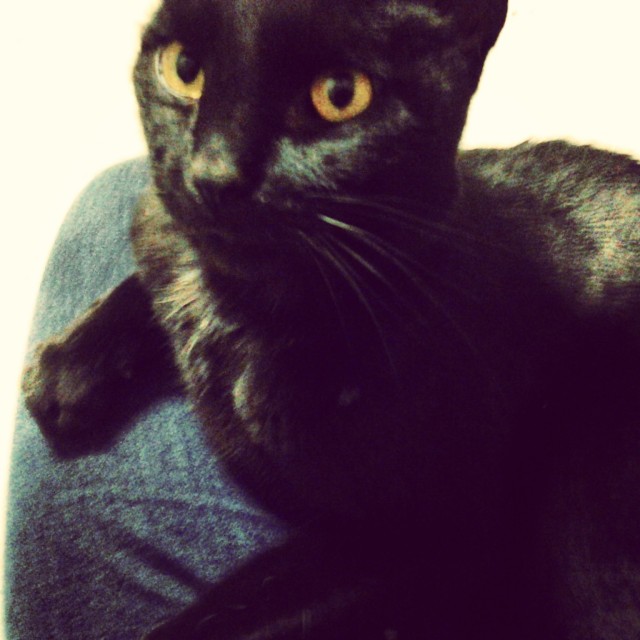 This is Derik. He is 7 years old, and I’m not sure what breed he is. He’s got this amazing panther-like face, jet-black glossy fur; graced here and there with strands of white. I love his paws. They’re powerful, but he never uses them to hurt or maim.

Everyone who meets him at the shelter falls in love with him, but sadly no one has adopted him.

He’s been my favorite cat since I began volunteering at a nearby animal shelter in September of 2012. He has never hissed or scratched me and has always greeted me with his trademark affectionate purr and feline saunter; a winding, confident way of walking that always made me think “dang, that’s one romantic cat.”

I have at times referred to him as Casanova.

For the past few months, Derik has been getting thirstier and thirstier. During my shift, he’d jump onto the counter-top and drink from the stream of water coming out of the faucet. If not that, he’d lick the drain on the floor beneath the large sink we use to clean litter scoops. If not that, he’d find a way to get into the other cat’s cages and drink from their bowls, until one of us, the volunteers, gives him a new bowl of cold water, because for some reason, he wouldn’t drink from his own.

One month ago, he was put on meds for a reason I don’t know of.

Today, I didn’t even recognize him. He’s lost so much weight and isn’t eating. There were 3 bowls of different kinds of food in his closure but he had touched none of it.

My heart broke when I heard from one of the staff that Derik’s kidneys are failing and he has a bone infection as well. He’s not expected to live much longer, I think.

I spent some time with him at the end of the day, keeping him in my lap. He’s still as affectionate as ever, curling into the curve of my arms, pushing his head into my hands and flexing his paws against my legs and chest.

He doesn’t have much time. The staff at the shelter are looking for volunteers to take him home, make his last days comfortable and happy.

I smiled ruefully. I’ve wanted to adopt Derik for so long, but my family is really quite strict on keeping animals in the home.

Still, I’d bring Derik home even if he may only have a few weeks left to live.

As I walked out of the door at the end of the day, I peeked into his closure and saw him eating from a plate of food we’d given him earlier. It was an encouraging sight.

I love you, Derik.

May Allah ease your pain and give you health, Ameen.